Cappadocia Turkey with its peculiar capricious and rocky formations and the architectural inheritance from the remains of millenarian cultures have given shape to a landscape that you will hardly find anywhere else in the world and also crown the region one of its kind with Cappadocia hot air balloons spot. Hittites, Assyrians, Persians, Greeks, Romans, Byzantines and Turks have left their mark and Cappadocia  was declared a World Heritage Site by UNESCO in 1985.

It is highly possible that when talking about Turkish travels while you are chatting with your friends,  the image of hot air balloons flying over unique rock formations with festiveness comes to mind , without a doubt Cappadocia in Turkey is one of the best places in the world to fly in a hot air balloons.

Attractions go far beyond the experience to get carried away by the wind and, once there, it would be unforgivable not to spend two or three days more to know what is hidden on the other side of the rocks in the undergrounds of Cappadocia

Fairy chimneys are the most famous postcards of the amazing geography of Cappadocia. Located in the center of Turkey, Cappadocia is a region of just over 200 square kilometers that is characterized by having a geological profile comparable to that of lunar landscapes, with shapes capriciously carved by the erosive forces for several million years. You can book our Cappadocia tour from Istanbul to explore this magic land with a guide escort in small groups.

The majority of tourists visiting Cappadocia in Turkey with the dream of flying in a balloon. The number of people who want to enjoy the flight is incredible and that is why it is almost always necessary to book well in advance,  there are several companies that organize the hot air balloon tours Cappadocia. In the low seasons during the winter(December, January, February), you can reserve a couple of days back and maybe one day before. But in the high season it is necessary to ensure balloon trip booking weeks or months in advance.

Both the fairy chimneys and the great majority of the rock formations of the region are made up of calcareous tuff, which is a very moldable stone. This allowed not only the work of erosion but also of man, who has built his dwellings in these rocks for centuries, digging them and creating artificial caves. The absence of wood in the area favored the almost exclusive use of these rocks as housing for the different civilizations that inhabited here. And so they reconverted these formations in the buildings, temples, towers and fortifications that were an essential part of their cities.

The most iconic and famous city in Cappadocia is Goreme. Its origins date back to the 3rd and 4th centuries, when the first Christians arrived in Asia Minor founded several monasteries excavated in the rocks here. Some of these ancient temples are part of the fabulous Goreme National Park, located around the city. Goreme is like a memory inside another…

Göreme/Goreme Open-Air Museum
The Göreme open-air museum can be reached on foot from Goreme town itself and we recommend it to be one of your first visits. It is a closed enclosure in which several Christian monastic complexes excavated in the rock are concentrated, many of them with frescos in their interior of the XI and XII centuries in excellent state of conservation. The churches of Santa Barbara, the Apple, the Serpent, the Dark, the Carikli or the Buckle are some of those that you can not miss, the magnificent state of their paintings make them the best in all of Cappadocia. 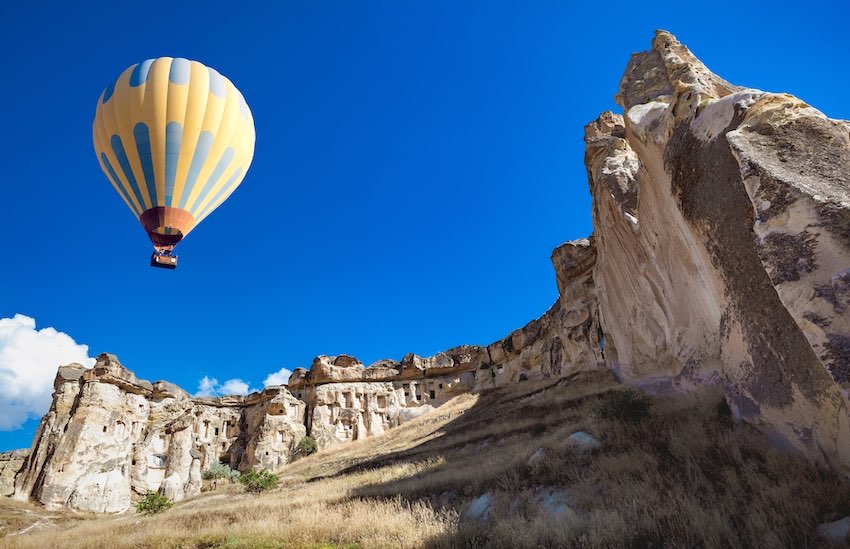 Rose valley along with Red valley are among the most famous. Their names are due to the hue of the valleys. Inside the Rose valley there are two churches that you should not miss: Hacli Kilise with its frescoes by a Pantocrator and the 9th century apostles, slightly damaged during the iconoclastic period and a carved cross on the ceiling, and the Columned Church, with its sculpted columns in the stone, in the latter, climbs the small stairs to the upper room.

Red Valley
More or less parallel to the Rose valley. Do not miss the Üzumlü Church with its frescoes. At the end of the valley, if you are in good physical shape, you can climb to the top of the mountains from where you will have spectacular views of the entire Cappadocia tours. If going up there is too much, there is another viewpoint a little further down that can be easily reached even by car.

Love valley
They call it love valley but they should call it differently…/shame!!! You can judge the shape of the rock formations for yourself once you come and you will agree. There is a viewpoint above with a heart and everything for you to take photos of yourself there. From the viewpoint you can also go down into the valley, which We recommend a lot because it is very beautiful.

Çavusin Castle and Church of Juan Bautista
This small town has an imposing castle that was completely carved out of the rock. A little further on is the church of San Juan Bautista, for which you have to pay admission.

Swords Valley
It is the closest valley to the city of Göreme in the direction of the Open Air Museum. If you are going to walk to the Red Valley you are going to pass through here for sure.

Pigeon Valley
Comparing to other valleys, it does not have many of the typical spike formations for which Cappadocia is famous, but worth a visit though if you have time in Cappadocia

The name “valley of pigeons” receives it because this is the valley where “houses” for pigeons were excavated as a farm in the stone. It is believed that it was to collect their droppings and use them as fertilizer in the vineyards in the area.

There is an observation point when you arrive at the valley from Uçhisar that leave anybody breathless. If you are going to walk on it, we recommend that you start on the Uçhisar side in the direction of Göreme and thus the path is downhill.

White valley
It is the continuation of the Love valley towards Uçhisar and as its name indicates it is very white.

Devrent Valley
Or Imagination valley. The most famous part of this valley is a camel-shaped rock formation. It is right at the entrance, next to the road. If you walk a little among the rock formations you can find (or imagine) other forms of animals on the rocks.