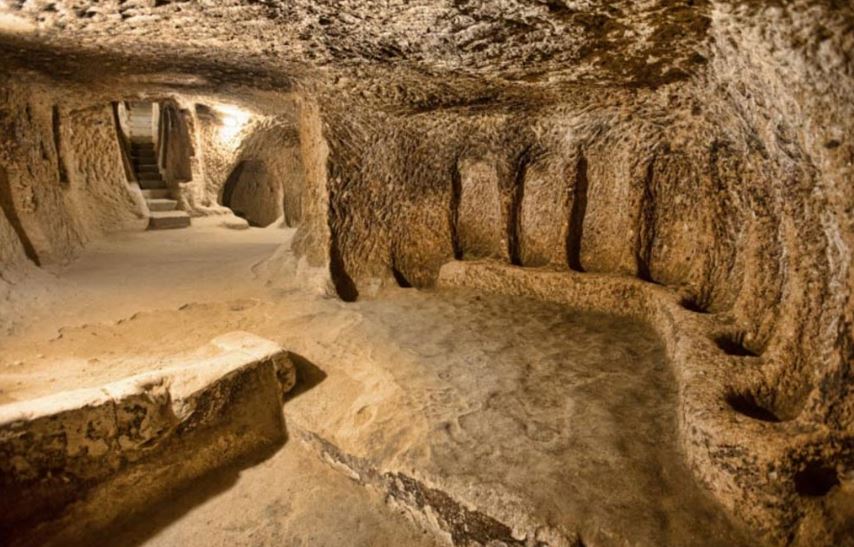 There are those who compare Cappadocia to a huge Gruyère cheese and it is not surprising. The soft rock that predominates in this region of Anatolia favored the ancient civilizations to carve the stone to build their houses, their churches and even their cities. This is the case of the underground city of Derinkuyu, a perfect hideaway in a time when it was convenient to go unnoticed. Cappadocia is a strange place. You can climb up to cloud by hot air balloons Cappadocia and go deep down in earth in underground cities.

Dug into the bowels of the eponymous village, the underground city of Derinkuyu is one of the most impressive examples of the Cappadocia region along with the underground city of Kaymakli. Located thirty kilometers south of Nevsehir, following the road leading to Nigde, it was known as Elengubu in ancient times, when life depended on the ability of peoples not to be seen by enemies. Although there is no consensus on the date of its excavation, various niches housed in the surroundings of the city suggest that the Phrygians were the first to inhabit it around the 7th century B.C. Conversely, other studies indicate that the first level was built by the Hittites centuries before. The period of greatest splendor of the city occurred during the Byzantine period when Christians occupied the galleries of the city trying to flee from their Roman persecutors. Christians expanded the number of excavated galleries and modified established structures to comfortably develop every aspect of their religious life. Hidden for centuries, the underground city of Derinkuyu was discovered by chance in 1963 when a local neighbor downed the wall of your house. Since then, about forty meters deep have been excavated, which represents approximately ten percent of the entire city. It was opened to the public in 1965.

Derinkuyu can boast of being one of the largest underground cities in Turkey. It is equipped with all the necessary spaces to develop a community life away from hostile eyes: pantries, kitchens, stables, winery, chapel, baptistery, wells, and even a school, although you can only visit 40 meters deep and eight floors , it is believed that the depth of this city is 85 meters and that it has about twelve more levels yet to be explored. There are more than a thousand galleries that could host a community of more than ten thousand people. A fabulous architectural work.

The plants were ventilated through ventilation channels, which reached the last floors but distributed in such a way that the city was prevented from being poisoned in the event of an enemy attack. It also has a 55-meter-long well that supplied water to the city’s inhabitants. This well had an outlet to the outside.

Among the structures that can be found in the city of Derinkuyu, the school that is housed on the second level is striking. The roof of the room is a barrel vault, a unique example within the excavated cities. At the back of the room are the spaces for the elites and on the sides are the study and punishment rooms for the pupils. On the third floor were the pantries, where the inhabitants of the city deposited food in Sufficient amounts to withstand a multi-month-long siege. The fourth level is intended for citizens’ homes and meeting rooms. They were illuminated with oil lamps as evidenced by the remains found in the holes in the wall.Finally, the cross-shaped chapel of the seventh level, with dimensions of 20 meters by 9, which once must have been decorated with colorful frescoes that have disappeared due to humidity.

The city had various security elements to prevent enemy introspections. The planning itself in the form of a maze already prevented direct access to the city in a simple way. In addition, each of the levels could be plugged independently of the rest by means of titanic half-ton stone wheels that could only be activated from inside the city. This favored the evacuation of the inhabitants to the safest levels. The second issue to be covered was the provisioning of the population in case of siege. The numerous pantries and stables guaranteed the subsistence of the inhabitants for several months without the need to go outside. The well guaranteed the supply of water in case of site. As a last alternative, there are several exits to the outside that could allow a safe evacuation. In fact, a tunnel is believed to exist connecting the city of Derinkuyu with the underground city of Kaymakli through a nine kilometer long passageway.