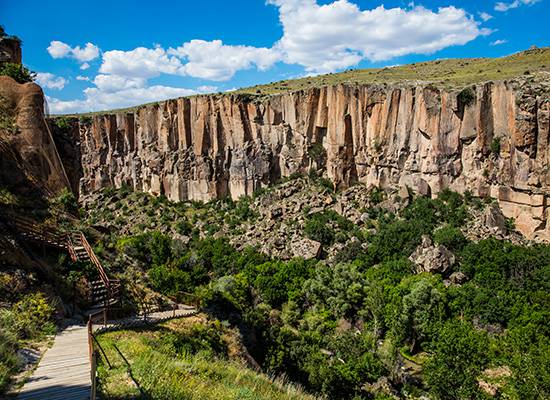 The Melendiz River has been crossing the docile surface of the Ihlara Valley for centuries, opening a canyon that reaches up to 150 meters deep in some areas. A haven of peace that did not go unnoticed by the first Christians who made this ecosystem their own home. The mixture of the wonders of nature with the work of human hands makes the Ihlara canyon become a very special enclave within the landscapes of Cappadocia.

This canyon, delimited by the towns of Ihlara and Selime, winds for 16 kilometers through the path left behind by the old Melendiz river. Ihlara Canyon is located 40 kilometers southeast of the town of Askaray and is one of the most splendid natural landscapes in Cappadocia. An environment brimming with life that invites tranquility and tranquility. The strategic location of this valley, together with the wealth and diversity of plant and animal species that populate it, make it an ideal place to hide and develop a discreet life. The Ihlara Valley was the refuge of a large Christian community that took advantage of the discretion and tranquility of the valley to dedicate themselves to meditation. Throughout the valley, hundreds of houses and churches can be counted. An important figure for a valley just 16 kilometers long. Going into the Ihlara canyon is a relaxing exercise. The light rocking of the trees and the melody of the water flowing through the stream produce a calming effect. It is understandable that it was the place chosen by the anchorites to indulge in a life of meditation.

Ihlara Canyon History The explanation of this canyon begins in the periods of greatest volcanic activity, when the giant cones of fire expelled lava and pyroclastic materials, which flooded the surface of Cappadocia. The passing of the centuries and the abrupt tectonic movements tore the earth’s crust in this region of Anatolia, exposing hot springs that began to cover the surface of the valley. All the ingredients that we have mentioned changed the morphology of this region, however the true person in charge of the aspect of the canyon is the Melendiz river, that formerly was known like Potamus Kapadukus, that is to say river of Cappadocia. The current of water eroded the volcanic surface of the valley to give it its current appearance.

The possibilities of this canyon are almost endless, from trekking routes running parallel to the stream to visiting the dozens of churches that are hidden in the canyon walls. Any activity that takes place in this fascinating canyon will be to the liking of the travelers. Apart from the natural beauty, the footprints that the first Christians left in this valley are important. Various religious orders reflected in Ihlara their way of understanding spirituality, protected by the natural fortress of the mountains.The monks excavated churches and houses in the rock that were later decorated with colorful frescoes. The passing of the years has determined the conservation status of the frescoes, deteriorating them, but there are still many examples of this rock art that can be seen in the Ihlara valley. There are more than 100 temples along the length and breadth of the canyon.Among the most important rock churches in this valley are the temples of Egritas, Kökar, Pürenli Seki, Agaçalti, Sümbüllü, Yilanli, Karagedik, Kirk, Bahattin, Direkli and Ala. All of them scattered throughout the canyon with such particular characteristics that they deserve a separate mention.