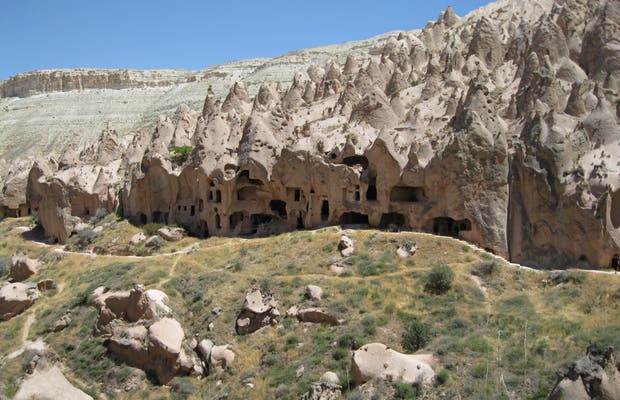 Zelve was not always a small region, between the 9th and 13th centuries, it was an important religious nucleus to which priests and anchorites withdrew to dedicate themselves fully to prayer. With the passage of time, new tenants came to this region, colonizing the valleys and excavating hundreds of houses in the rock. This peculiar lifestyle lasted for centuries. Nowadays its one of the most visited areas in the region by tourists and hot spot for picturing balloons Cappadocia in the morning.

The Christian and Muslim communities coexisted peacefully until 1924, when there was a massive diaspora of the Christian community for political reasons. This did not mean the abandonment of the valley that continued to be inhabited until 1952, when the Government of the Republic of Turkey determined that this region was uninhabitable due to the poor state of preservation of the houses and the risk of collapse of the houses. They were deserted and its inhabitants founded the new town they called New Zelve (Yeni Zelve) just two kilometers from the valleys of Cappadocia. Due to the historical interest of the abandoned region, in 1967 Zelve became an open-air museum without too many possibilities for restoration due to aggressive erosion.

The museum is located at the intersection of three valleys, two of them interconnected by a tunnel. The environment offers travelers a landscape riddled with slender fairy chimneys, houses carved out of the stone, passageways and tunnels that connect different caves; An especially interesting place to enjoy hiking and climbing. The passage of time has been inclement with the frescoes of the churches, deteriorating the cave paintings that adorned the walls of the temples, nothing to do with the vivid colors that can be seen in the Göreme complex. In addition, it is believed that the inhabitants of the region were opposed to pictorial representations despite the iconoclastic establishment of the Byzantine government.With or without fresco, the excursion through the valleys of Zelve is more than enough incentive to visit this remote Cappadocia region.

What to see in Zelve Museum?

Direkli Kilise, the Church of the Columns: it is accessed through a horseshoe-shaped door and owes its name to the six columns that support the central dome of the room. This temple, built in the early eleventh century, has three apses and three naves. Although the frescoes are very deteriorated, paintings are still preserved in the columns and in the central apse where Jesus Christ is represented, accompanied by the Virgin Mary and Saint Peter. One of the curiosities of this temple is that it is believed that the future monks were formed there.Üzümlü Kilise, the church of grapes: This temple was built around the 10th century, originally it had inscriptions that indicated the name of the temple and its date of construction. Its name is due to the grapes represented in the frescoes that decorated the walls of the church; they are currently in an unfortunate state of conservation. Despite the deterioration, you can see symbols that tell us about the way of life of that time: crosses, motifs related to fishing and of course, the bunches of grapes Geyikli Kilise, the Church of the Deer: Its name is due to the old paintings that cover its walls, now almost unrecognizable, that depict the main symbols of Christianity at that time: the cross, deer and fish. It seems that the fish represented the new faithful of the church. Balıklı Kilise, the Church of the Fish: It owes its name to the fish represented in red in the central apse of the temple. You can also see a huge cross that occupies the center of the apse. Finally, you can visit the remains of an old mosque built with stone and mortar that preserves a beautiful minaret and an old mill that was used until the mid-20th century.